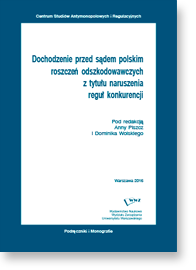 The book Pursuing damages for competition law infringements before Polish courts edited by Anna Piszcz and Dominik Wolski is the result of work of the team of authors examining the provisions of the Directive of the European Parliament and the Council 2014/104/UE from 26 November 2014 on selected problems related to the competition law infringements of the EU members states and the European Union covered by the national law as well as their transposition into Polish law. The EU member states were supposed to implement the laws, regulations and administrative provisions necessary to comply with it by 26 December 2016.

The composition of the book is determined by the structure of the Directive 2014/104/UE. The first chapter presents the synthesis and an attempt of the systematization of such issues as civil law elements in the public anti-competitive system, main problems of public correlation and private enforcement of competition rules, private enforcement of competition rules in Poland in the period preceding the implementation of the Directive 2014/104/UE as well as general issues related to this directive. Then, the authors pay attention to the principle and conditions of liability for damages, quantification of harm and passing-on of overcharges (chapter II), disclosure of evidence (chapter III), the effect of national decisions (chapter IV), joint and several liability of the entities infringing competition rules and its restrictions (chapter V), time limitation for claims (chapter VI) and consensual resolution of disputes concerning damages resulted from an infringement of competition law (chapter VII). The last part of the book is the summary (written also in English) in which editors have collected the conclusions and recommendations based on the analyses made in different chapters for the national legislator.

The authors sum up the hitherto state of knowledge about the enforcement of competition rules through private law and make an attempt to solve the genuine problems of the transposition of the provisions of the Directive into Polish law. The specific chapters present a critical analysis of the provisions of the Directive. A significant body of the chapters is dedicated to the recommendations for the national legislator. The authors believe that the publication can constitute an important element in the substantive discussion about the changes of the Polish law related to the enforcement of competition rules through private law. Moreover, they think that this book can enhance the right transposition of the Directive 2014/104/UE, which will ensure the possibility to effectively pursue damages for competition law infringements.