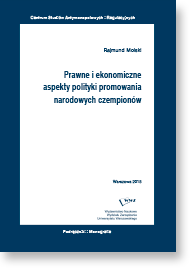 The policy of promoting national champions by the state has sparked controversy which in turn provoked a lively debate on the rightfulness of this policy. By now there have been more questions than answers in this debate. The key problem boils down to answering the question whether national champion corporations should be formed spontaneously, or rather an active role in their formation and growth should be fulfilled by the state, and if so, what the public support in this case should consist of. Moreover, another issue which needs to be addressed is the real dimension of the policy of promoting national champions pursued in practice by various states, as well as the question of its compliance with competition law and policy understood in a broad sense. As much as these matters have gained particular importance during the time of an intensified public intervention in market economy arisen as a result of economic crisis, their topicality cannot be reduced merely to this period of time. The objective of this monograph is to attempt to respond, at least in part, to the aforementioned fundamental questions.