(16) Konrad Stolarski, Prohibition of abuse of a dominant position in telecommunications markets in European Union law (2015) 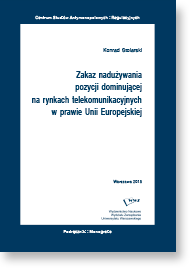 The subject matter of the book concerns the functioning of the prohibition of abuse of dominant position on telecommunications markets in the law of the European Union. It presents an in-depth, comprehensive analysis of the aforesaid institution, which is aimed at the explanation of problems, that may be experienced during its functioning in practice. As a matter of principle it is the law of the European Union which serves as the reference base for such analysis, however for comparative purposes the author also undertakes to establish in what way similar regulations function in the legal systems of Poland and selected EU member states. The main purpose of the work is aimed at providing an analysis of how the specific nature of a strictly regulated telecommunications market effects the application of competition law institutions, and above all – Art. 102 TFUE. In this respect the author studies such issues as the boundaries of regulatory and antitrust intervention and the relations between the directives, which are basis for the activity of national and EU regulatory and antitrust authorities. The book also thoroughly analyses several notions characteristic from strictly antitrust perspective such as market definition, dominance, collective dominance and objective justification of abusive practices. It finally presents an analysis of the most characteristic meeting point of regulatory and antitrust law i.e. the regulated conduct defense in antitrust cases.